We are excited to be holding our Institute at the Roosevelt Hotel!  Prior to Hurricane Katrina we held two workshops per year at this magnificent, historic hotel.  They were telling us for 3 years that it would not reopen, as it was devastated.

We were delighted to discover several years ago that it is indeed open and as magnificent as ever!

"How many hotels leave such an impression that 80 miles of highway are built just so the governor can get a drink? The legend of Huey P. Long and Airline Highway is one of so many that defined The Roosevelt’s brilliant 40-year run during the early 1900s. Though the hotel originally opened as The Grunewald in 1893 and was later renamed The Fairmont, it was during The Roosevelt years that it established itself as a beacon of luxury in the South. The hotel was a revolving door of the time’s most famous names—Louis Armstrong, Cab Calloway, Ray Charles, Jack Benny, Bob Hope, Elvis Presley — each adding to a legend that continues to be written today."

After a day of fantastic professional development, thinking, working and fun it's time to step out into the famous French Quarter of New Orleans.  click here for things to see and do in New Orleans! 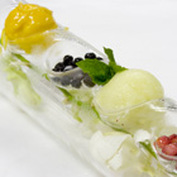 The Roosevelt Hotel will be catering our events.  We know that well-fed educators are happy learners!  You will enjoy our complimentary . . . 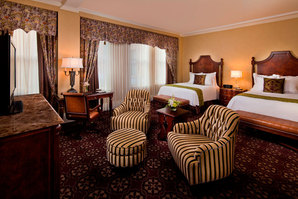 Tour the hotel here.  Click the photo to view the Rooms and Suites. 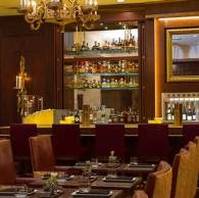 Opened in 1938 under the direction of then-hotel owner Seymour Weiss, the Fountain Lounge was a place where the hip, sociable and fashionable met to enjoy cocktails and small plates in an atmosphere described as “casual and carefree as a night in Paris.”

Featuring rich wood flooring, luxurious fabrics and high-end finishes, the new Fountain Lounge balances its glamorous tradition with modern touches.  The lounge will feature live entertainment with a focus on inventive cocktails and small plates, in keeping with its storied history.  The new Fountain Lounge will set itself apart by offering a full raw bar serving a massive array of the freshest oysters and shellfish from the Gulf Coast and also a sampling of the best raw seafood from around the world.

"Named after what many consider to be the world’s first mixed drink, The Sazerac Bar carries with it as much history and lore as its potable namesake.

Just gazing at the famous Paul Ninas murals that flank the long African walnut bar takes you back to the grandeur of old New Orleans—a time when Huey P. Long would stroll in, order a Ramos Gin Fizz and spend the next couple hours talking to his constituents. Restored to reflect the spirit of the original establishment, the elegant barstools and plush banquettes of today’s Sazerac Bar invite locals and visitors alike to enjoy hand crafted cocktails and free-flowing conversation."

"Savor the Moment.  Just off the Grand Lobby you will find Teddy’s Café, an exclusive coffee lounge and sweets shop committed to the time-honored coffee-making _tradition of New Orleans. Order local favorites like café au lait and beignets, sip a cup of Roosevelt Blend or indulge in a glass of one of our featured wines and champagnes. Enjoy delicious fresh baked pastries like the Waldorf Astoria Classic Red Velvet Cake, seasonal Louisiana fruits or a variety of frozen drinks. The warm, comfortable décor will invite you to sit down and savor all of the tastes of New Orleans."

It's July, and it's hot in New Orleans.  What better way to relax and cool down than a swim in the beautiful rooftop pool at the Roosevelt Hotel.